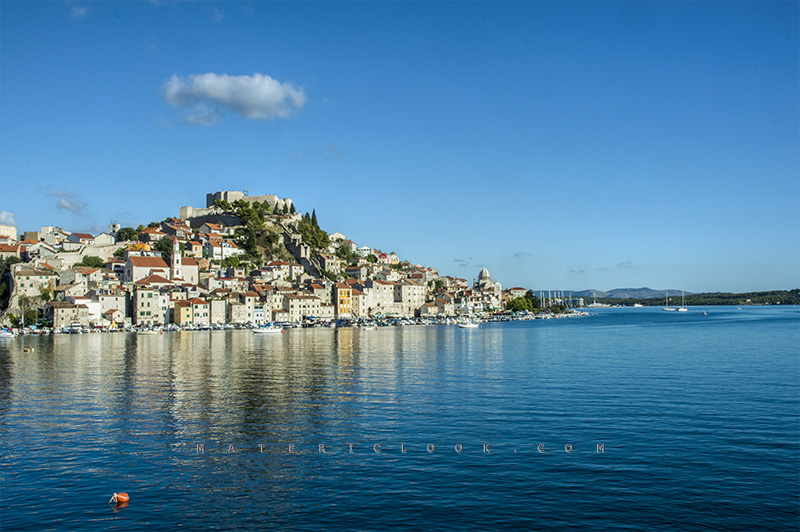 A very nice historical city, with narrow alleys and steep stone stairs, lovely for taking a walk in a warm summer evening!
The city itself has a turbulent but interesting past, it has been controlled by Byzantium, Hungary, Venice, then the Habsburgs and Austria, more recently Dalmatia, Italy, then became part of Yugoslavia and finally Croatia.
The ancient settlement became a city at least from 1066 AD, when a document from the most important Croatian ruler, Kresimir (Petar Kresimir IV) refers to it.
A note on the shot itself: the horizon line is difficult to spot, (you can guess it from the mountains far back on the right).
The coastlines from the city and the opposite shore are converging, so the overall impression is somewhat “unstable”.
However the mind clings to a vertical line, shaped by the reflection of the city in the sea water, the fortress up the hill and the cloud above….
I personally like it, but probably not everyone will!
The eligible patrons already got their download link 😉
As always here there are the available resolutions:
-For quad-HD monitors and the like: WQHD – aspect ratio 16:9 – resolution 2560×1440
-Full HD: FHD – aspect ratio 16:9 – resolution 1920×1080
-For 16:10 screens: WUXGA – aspect ratio 16:10 – resolution 1920×1200
-For tablets and 2-in-1: I see it’s now called FullHD+ on Wikipedia, so FHDp – aspect ratio 3:2 – resolution 2160×1440
-For “Traditional” 4:3: UXGA – aspect ratio 4:3 – resolution 1600×1200
-For 5:4 monitors: SXGA – aspect ratio 5:4 – resolution 1280×1024
If you want other resolutions or aspect ratios, just ask away!
If you would like to receive wallpapers or prints each month, or just support me with 1$, take a look at my Patreon!
Image
We use cookies on this website: Accept If you want o find out how to delete and/or stop cookies Read More
MatericLook
Proudly powered by WordPress Theme: Ryu.