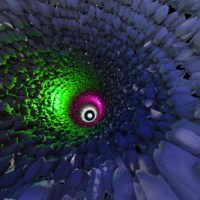 A shapeless metal creature that saw us. It’s experimenting, changing, taking on a form, something more similar to us. This serves a sole purpose: it’s trying to communicate… but for now the message it’s still far, far away…

But first,  to all my subscribers and patrons that participated to the survey: the “thank you” prints are on their way, your help is very important to me!

Initially I created the 3d figure only. I was thinking about shapes and sculpting, a form similar to what you see… So I illustrated it through digital sculpting. There’s a contrast between planes and curves, smooth joints and angles. I tried to give some harmony to the object, but I didn’t followed a true “rhythm”. During the process I “anthropomorphized” it a bit though, widening the top part and giving it the “Eye” (or “Mouth”).

I liked the work, so I decided to go on and show it. A worn metal look seemed to me the most appropriate, a nice contrast to the shape. In a way a kind of unexpected material.
I worked on it for a bit, because I had a pretty precise idea in mind about that… so I elaborated some pictures to reach the results I was willing to show, in terms of scratches and color. I used them to setup the shader, a technical term for the elements controlling the final “material” displayed by the rendered object.
That’s also the material I would like to use if I’ll ever have the possibility to realize the work in the physical space -that is, by casting it! I was thinking of having it 50cm (20″) tall or more (ideally a 75cm-25″ “home version” and a 2,5m-8′ “outdoor version”).

Finally I rendered an animation with realistic lighting and setup to show the shape and, more important, from a certain point of view, to present the viewer with a pleasant and interesting transformation of shapes, reflections and shadows.