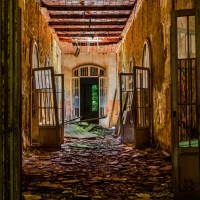 A new urbex image, this comes from an abandoned asylum in Tuscany…

One of the main corridors on the asylum ground floor, inside one of the more damaged buildings. The roof partially collapsed.

You can see the first floor is damaged too, just at the end of the corridor it fell through. This gives a nice place for the light (and rain) to enter the building.

From there on, the place began to seem a bit more creepy than outside, you’ll see it in some of the other images! 😉

About the image itself:

I like the depth and transition from darkness to light, through strange shapes and formless shadows here and there…  Also this one is a multiple exposure with HDR elements, with the addition of a little bit of digital painting (just a few pixels, to correct some excessive noise), and a few other operations to get some nice subjects from the different shots.

The doors and the light coming from outside give some nice touch of shape and color. It’s more evident on the lateral doors themselves and on the front wall, around the double door frame. However the best part (in my opinion) is the mossy green wood! It plays with the vegetation green at the very end, behind the bars, and with the green light reflected on the right, bottom door.

The flaking paint on the walls is also giving a nice warm tone to the entire image. The floor, covered in rubble, gives more depth and details. It accompanies the eyes toward the double front door.

I will create some urbex wallpaper versions of this one for my patrons, to be used on various screens and resolutions.

As (almost) all my works, this is available as a print on large canvas (limited to 10) or cotton paper (signed). If interested you can take a look at the shop. If it’s not available yet, you can contact me directly.

Here are some free works for download as wallpapers, as well as some animations to watch.

If you like this or other of my works, please consider supporting me on Patreon with 1$/month, or donate something through Paypal: 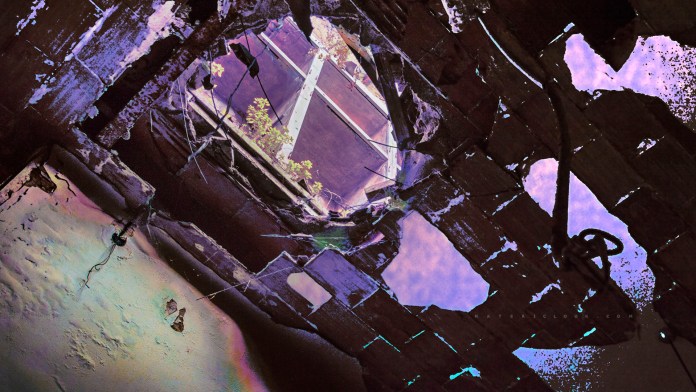 As promised, here’s July wallpaper too!
This time I played a bit with multiple layers, compositing operations and HDR, to get to a look that should be something inbetween a photo and an illustration… I think the pink (almost) full color areas on the ceiling are definitely giving that kind of impression.
The shot comes from the abandoned italian asylum too… Here you can see why the warning sign outside! 😉
Why SpiderNest? Because all those “smooth” areas around the collapsed ceiling edge are huge spiderwebs, of course!
It will look great as a wallpaper, full of black areas where to place icons and stuff! That’s for my patrons, you can become one too!
Image Hello, I’m currently working on some Urbex shots, but focusing on some Street Art & Graffiti materials… this one comes from the walls of an abandoned asylum in Italy.

The place is (or was?) full of beautiful art, inside and outside, on different buildings scattered around. The asylum had a nice park around it, now it’s more like a forest, slowly eating away the structures.

In case you’re wondering what’s the sign on the top right, it means more or less “Do not entry, dangerous construction”.

The shot has enough uniform colored areas (the brickwork) to be a useful wallpaper. In different resolutions and aspect ratios, it’s June wallpaper for my eligible patrons (on Patreon).

One more thing: I really like this piece, the light coming from above and the green tones of the ivy spreading to the colums. It’s possible I will do a more elaborated version for printing in the future (let me know if you would like to have it as a physical print too!)

PS if you’re the author of the depicted work, just let me know. I’ll be happy to put up a link/credits/have a chat! 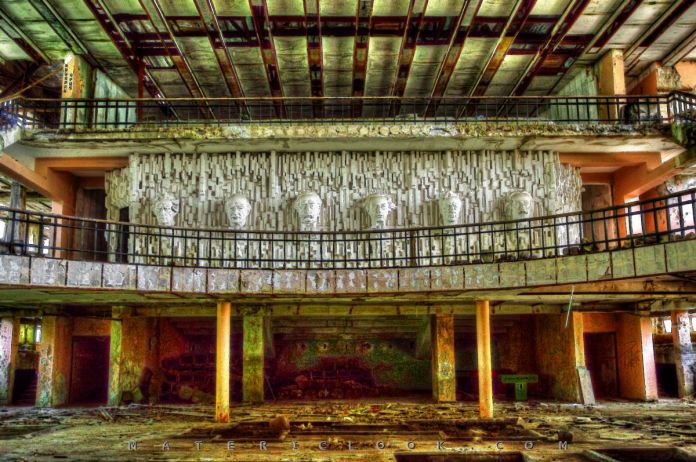 Hello everyone, back from my trip to Armenia, here’s a first related work.

A large abandoned soviet-era building in Jermuk, with a nice sculpture on the facade. It caught my attention, so I took a few steps inside.

At first it didn’t seem particularly interesting. Almost empty, with a relatively modern structure… but after reaching the middle of the ground floor the view is just great!

On both sides there are these very interesting statues, with series of 6 very large heads. A few of them have some lipstick or mustaches added by some “joking thug”.

The impression is definitely surreal. The grandeur of the building and the imposing visages offer a stark contrast from the crumbling stairs and flaking paint. The temperature adds to the feeling: it dropped at least 10 degrees upon entering the building. The cold suggests being inside a giant refrigerator fighting to freeze time, surrounded by a very warm  sun, overheating everything else.

From the few information I was able to gather, it seems the building was indeed built during the soviet era by USSR government. The faces inside represent Armenian heroes and fighters for freedom.

If anyone can provide more info regarding the building and/or the faces, I’ll be happy to include them. The construction is currently undergoing some kind of renovation, as there are some construciotn materials outside, so it will probably not last long in the current state.

Also here I want to stay on the edge between a picture and a drawing/painting. I made the flaking paint very visible, but the colors brilliant and saturated, to remind the life that was once here.

I focused on the faces and the geometric structure behind, making them stand out a bit. Also wanted to keep the darkest areas not completely black, but suggesting that something’s there.

I then experimented something: In these dark areas I created a look somewhat similar to stains and saturated watercolors, to further the distance from a photographic look. I also used some black fading strokes to highlight details, on both the faces and the structure. You can better appreciate those touches in the details shown below (half of the final work resolution): 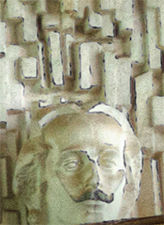 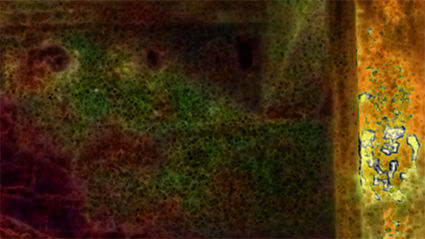 If you like this or other of my works, please consider supporting me on Patreon with 1$/month. By doing so you’ll be able to participate to the creative process and suggest the kind of works you like the most! Thank you 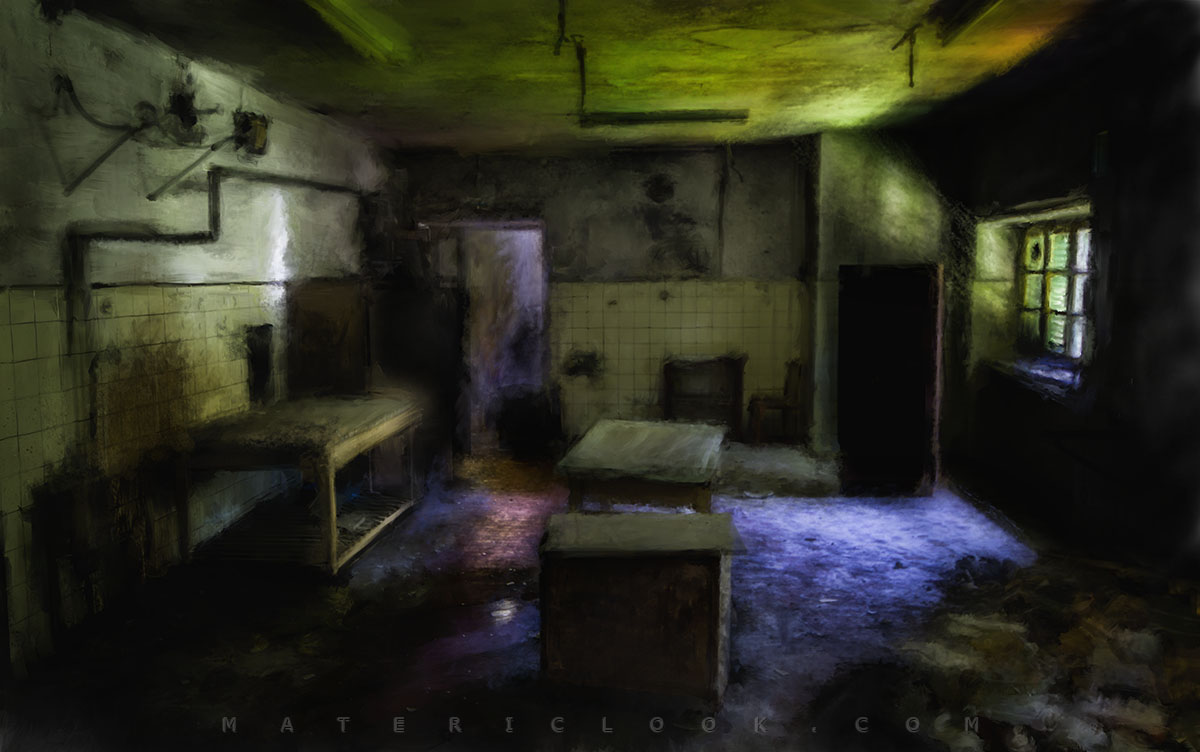 I started from the elaborated set you can find here, then I proceeded by making it a digital painting, destroying all the detail I deemed unnecessary: 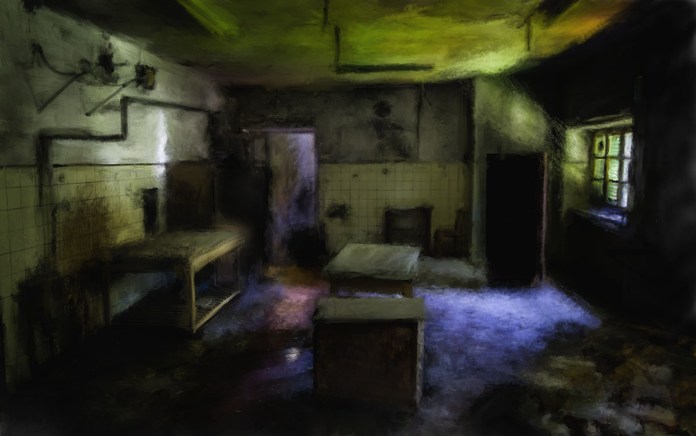 -Digital painting it’s controversial, mainly because of some cheap works done with automatic processes. Automatized painting is plain horrible, uniform and lifeless, seems more a filter than a true elaboration.

I do the whole process by hand on a graphic tablet, in this way it’s possible to control pressure, width, inclination, rotation, practically all the aspects of a real brush or tool. There’s also a bit more freedom in certain areas: it’s possible to have an infinte number of “tools” and configure each one.

The process is made faster by the possibility of having, with certain brushes, the starting color areas the same as the starting image, or to use that image as a quick reference.

That makes it easier to concentrate on brushstrokes shapes and direction and/or color control, giving a pretty wide range of possible looks to the final work. It’s also common to add (or remove) objects or details here and there, to recall the attention of the viewer to the “right” spots. –

As a next step I added back some textures and contrast in the highlighted areas, were the colors are stronger and the patterns beautiful.

The digital painting process has been longer than expected because I wanted to reach some strong details impressions with few brushstrokes (digital), like the white speckle on the left-low quadrant and the window….

I really like the final look of that window, here’s a zoom-in (at half resolution, more or less): 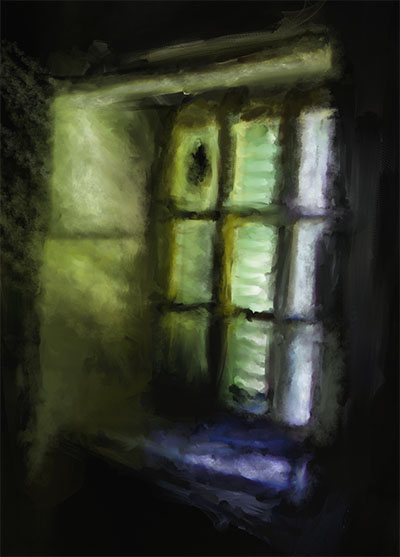 I hope you liked it too!

If you enjoy my works, please consider supporting me Patreon – there are some crazy rewards! 😉 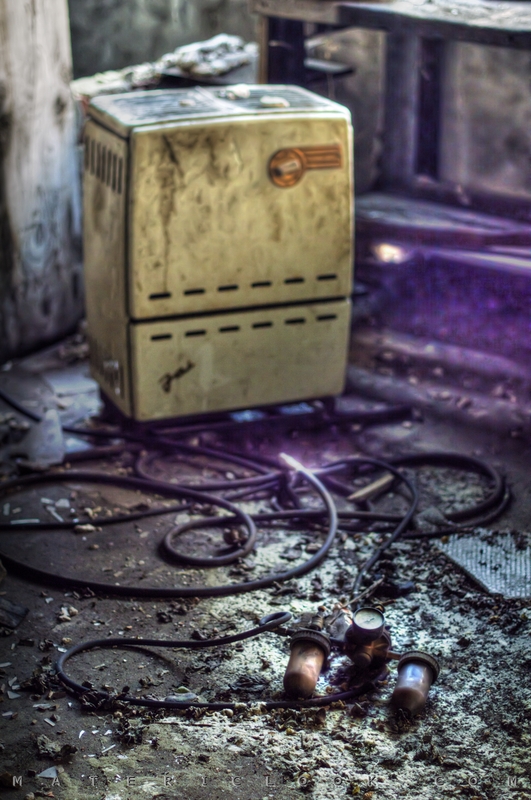 “The only entry could be through a broken and very small horizontal window panel… the lowest one has some dangerous shards that it’s better to remove before crawling inside. It’s also good practice to take a look inside before just falling in…. and that’s a good idea, the floor is near and it’s a lot better to push myself in facing upwards, to not get stuck or hit with my legs the other glass panels.

There’s barely the space to push my torso in…. …holding my breath!…

In a few seconds I pass through, the room is huge, should have been a workshop or something similar. near the other end the darkness is almost complete, let’s go check it out…

The floor is almost empty, almost nothing has been left behind when the building was abandoned, only dust, dirt and the occasional rubble pile. The dark zone hides the remains of a demolished brick wall, behind that an innatural blackness surrounds everything, the light from my torch doesn’t penetrate… what?

Approaching the darkness I understand what’s going on: the whole area is covered in a thick layer of black dust, coal, probably… There are a pair of giant holes in the walls, it seems were furnaces. However the floor isn’t really visible, there are broken bricks covered by the black powder and I can clearly see at least a large hole that could be dangerous. In any case it doesn’t seem an area particularly interesting, I think it was carefully emptied years ago.

I go back near the entry point and explore the area there. There’s a wooden panel separating this from another section, it’s possible to push a kind of door, some nailed boards mounted on hinges, and pass through.

The other side is more “lively”, also abandoned, but probably less years have passed since someone was there. Other panels divide smaller sections, workbenches here and there, nothing else left behind except for a zone near a corner.

An old heater’s there, probably left after the plant was closed, and some kind of filter and regulator for an air compressor or some other type of gas tank.
Looking around is possible to see various other tubes and filters, near the abandoned sideboards lay some old hand tools.

Maybe the heater has been used by the person that lived in this space not so many years ago. It’s not electric, so he/she could have used it to protect himself from the freezing winters, common in this region. Under one of the workbenches thare’s a large shelf for tools, large enough to sleep on it… there are some shredded clothes stuffed inside… a sort of nest.”

If you like my works you can help me create more and get something in return through my Patreon page! 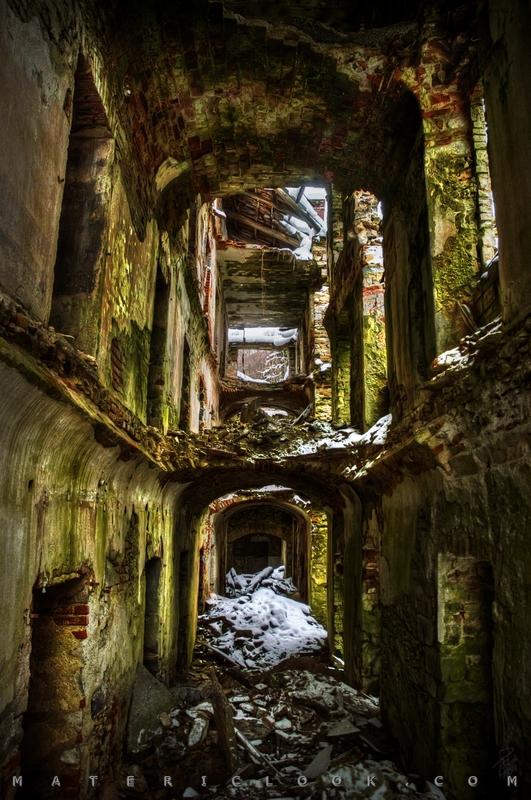 “The structure is crumbling and the snow isn’t making the situation any better… actually it’s the worst possible time to have a look inside, but I can’t help… let’s just be cautious and double check floors and ceilings…”

If you like this or some other works I’ve done, please consider supporting me on Patreon and get tutorials, help or custom works in return!