Last week I participated as DoPe to a private exhibition/event hosted by a friend in his house.

A pair of works from DoPe (me and Paolo Dolci) were printed and exhibited in small wall structures made of metal and wood by paolo. I’ll post some pictures in a future update. We also presented one of our sphere animation as a projection, on a large icosahedron placed centrally in the main exhibition room.

The icosahedron was also built by Paolo and you can see it here, to have  a sense of scale: 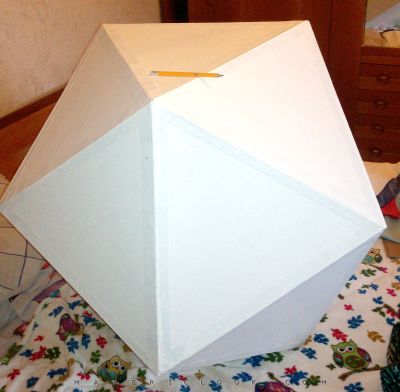 The projected surface gave the impression of movement and continuous change, morphing and reshaping itself, with colors creeping around and geometric shapes rotating mechanically….

During the whole evening the event was accompanied by great ambient music created by Luca Bergero. He also executed a great live performance, using carefully prepared objects as sources for his sounds and music. You can contact him here: luca DOT bergero@gmail.com

The music and ambient sounds, and also the guest’s voices were used to change, in realtime, the second projection. Its main theme is the sphere animation, plus a sequence of related artworks from DoPe.

The projection background is more or less visible, depending on the currently played audio frequencies. It’s a realtime video of Luca creating the audio and the rest of the animations and effects are composed on it. Colors and brightness are both influenced by the video (Luca’s movements). It’s possible to see his profile while he moves around, working on mixers and “cabled” objects – his musical instruments!

A wall acted as a screen and during Luca’s live exhibition I also worked “live” on some of the animations and colors.

You can see a short abstract here:

You can see the icosahedron at the bottom center, while the realtime-animated projection is on the right.

I will provide a nicer video as soon as I can get my hands on a friend’s footage. After some small editing work I should be able to present something more “structured”…

Hello! lately I’ve been absent, due to a few overlapping projects as a freelancer… sorry about that. I couldn’t complete any new work, but I want to update you on what’s going on and throw some ideas around 😉

The freelancing projects I’m working on are (partially) related to graphics and the like, I’m speaking of 2D animation, 3D animation and some electronics (related to transmitting and recording video wirelessly).

BUT I’m also working on an art-related project with Paolo.  We’re creating a pair of “video” installations, one similar to a projeciton mapping on a real icosahedron: 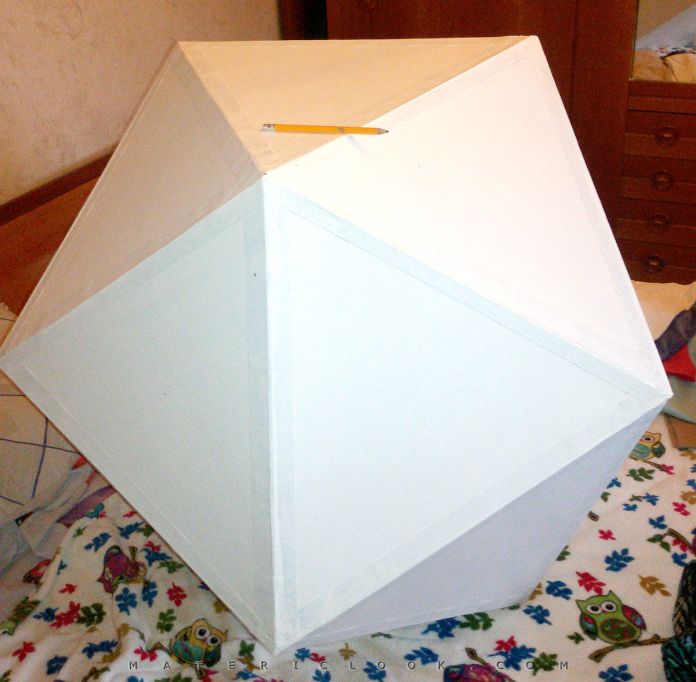 A standard projector will cover half the icosahedron’s  shape. It will be placed in a room corner at a friend’s exhibition in November. I’ll use the faces and shape to create some interesting transitions and animations. Some of our previous animations, (mainly from the Spheres series) will be used as elements, as well as new things.

But the second, less defined part  is what I have more updates about: Paolo got an old film projector (Super Almo is its name). It was hand-operated and the light came from an old lamp…

We decided to restore and modify it, you can see some pictures here, showing the parts and the modifications. I wanted all changes to be reversible, so I mostly removed and substituted parts. The only “hard” change was done to the manual advancement handle…. you’ll see later why: 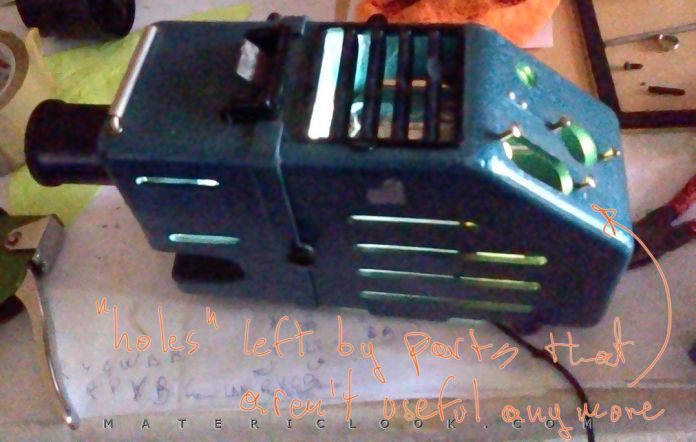 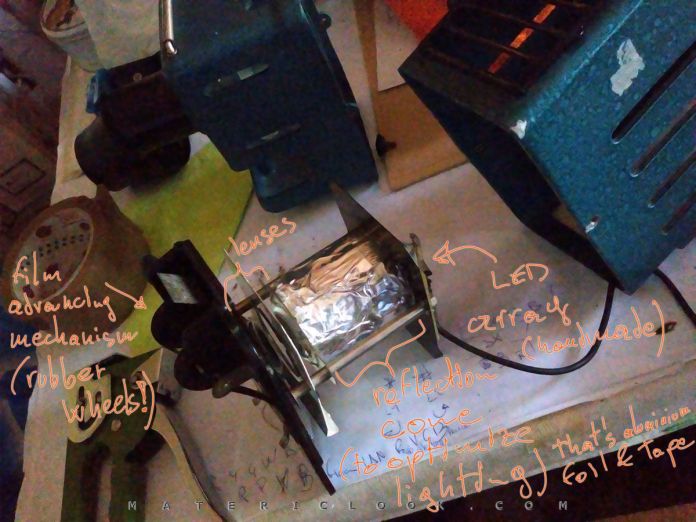 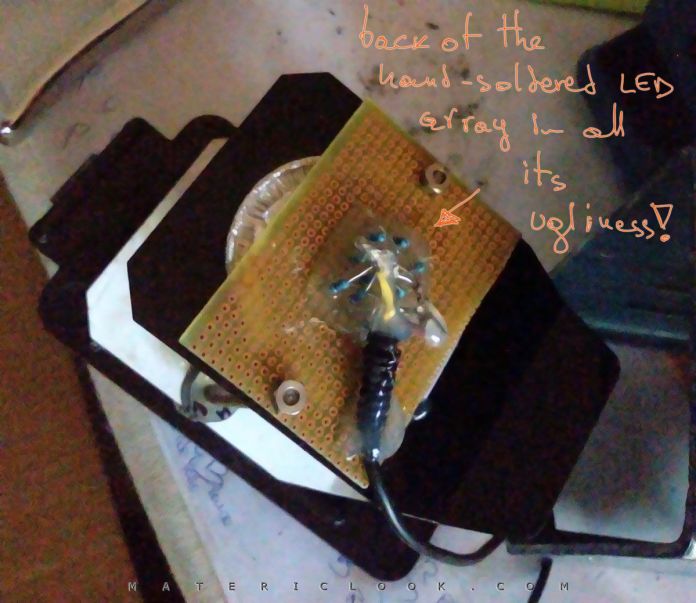 So the changes have been made to the lamp, replaced by a crude high intensity LED array. I added along the light path a “reflection cone” to optimize the light flux and reduce dispersion.

The back reflective dish wasn’t useful anymore because the LED are nicely directional, compared to a traditional lamp.

The projector also became A LOT lighter by removing an electric transformer, plus some switches and plugs. Now everything is powered by a refurbished PC power supply.

To the film advancement mechanism then…

Paolo had the idea of “motorizing” it and to somehow paint and draw on a transparent film to show our content… He sourced a (less)old cordless screwdriver, so I worked on a small, simple circuit piloted by a microcontroller (Arduino), constantly moving back and forth the film… enjoy!:

As you can see, “traditional” film isn’t making any sense because of the continuous lighting and speed.

Next we’ll experiment two different things, first to create some ad-hoc content (the painting/drawing I was speaking of, these will evolve along the length of the film roll, to take advantage of the optical effect).

Then I want to use the microcontroller to control the LED lights as a shutter. By turning them on and off pretty fast they should show a sequence of  full frames only. This approach will also require (probably) a finer circuit to control the motor (thus film speed).

I will keep you updated on this and other projects, let me know what do you think on the comments! Thank you!

PS one more thing: if you received and answered the survey you should get the small free print, if you haven’t already! Let me know when you get it and what do you think!